Today’s Power Tip:  Shop Wisely – When Organic Matters the Most 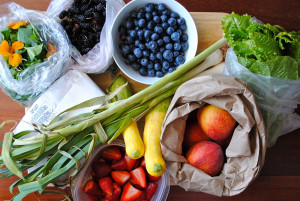 Many people ask me, “What are the most important products to buy organic?” The Environmental Working Group (EWG) recently released its 2017 Shopper’s Guide to Pesticides in Produce™ that can help answer this question.

This yearly guide includes a list of fruits and vegetables that contain the highest amount of pesticide residue. I want to share this important information since pesticides are linked to various health conditions, including  Alzheimer’s disease and cancer. In the EWG’s analysis of tests performed by the U.S. Department of Agriculture, almost 70% of the non-organic food samples were contaminated with at least one pesticide. Unfortunately, pesticide residues remained on fruits and vegetables even after they were washed and, in some cases, peeled.

What produce had the most contamination?
For the second year in a row, strawberries were at the top of the Dirty Dozen™ list.  Twenty different pesticides were found in a single sample of strawberries.  Spinach ranked second with 75% of samples contaminated with permethrin, a neurotoxic bug killer that is banned from use on food crops in Europe. Nectarines, apples, peaches, pears, grapes, celery, tomatoes, sweet bell peppers, and potatoes filled the remainder of the Dirty Dozen™ list.

What produce had the least contamination?
On a more positive note, the EWG has a Clean Fifteen™ list of non-organic produce least likely to contain pesticide residues. This list includes sweet corn, avocados, pineapples, cabbage, onions, frozen sweet peas, papayas, asparagus, mangoes, eggplant, honeydew melon, kiwis, cantaloupe, cauliflower and grapefruit. It is important to note that a small amount of sweet corn and papaya sold in the U.S. is produced from genetically modified seeds (GMOs). Stay tuned for my next newsletter to learn more about GMOs.

What should we do?
While I am a big proponent of consuming organic food whenever possible, choices can be limited and organic food may be out of budget. You can use these lists to know when it is most important to purchase organic. I have found that buying organic fruits and vegetables at farmer’s markets and CSAs (Community Supported Agriculture) helps keep the costs down and quality high.

Though there are toxins in our environment we can’t control, fortunately there are some we can. I hope these lists help you reduce the pesticides you consume so you can be your best and healthiest self.